It was chestnut time.

The meeting on the evening of 15th February saw a good attendance of almost 50 members for the latest of John Gardner’s Lights Nights. There are events where our resident professional photographer and long-time member John Gardner brings along a model and gives everyone the benefit of his wisdom re lighting for models. As usual he came along with a model but tonight it was a little different in that the model was Alan 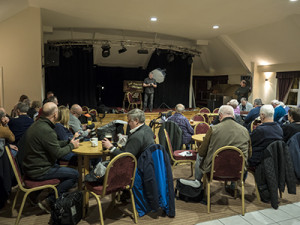 Jones, the well-known “Hot Chestnut” man fresh from his usual pitch in the Cathedral Precinct. Unfortunately we couldn’t get his hot chestnut stall up in the lift so it was just Alan and his dog, Albert. Alan is a familiar face in the Cathedral Precinct over the winter months, selling his wonderful roasted chestnuts to cold shoppers and workers. It is a family tradition with Alan following his father, also called Alan, who in years gone by plied the same trade for many years, usually at the entrance to the old Bus Station selling to cold and weary workers and shoppers on their way home. In fact he was helping his father out when he was 17 which was, shall we say, some years ago. Alan senior was also travelling a showman and used to tour with the fairs in summer with rifle-shooting stalls and coconut shys. Alan junior followed on in the same trade. The chestnut stall became a fixture of Wakefield life in winter and there are many people who looked forward to a simple treat of freshly roasted chestnuts from the stall. 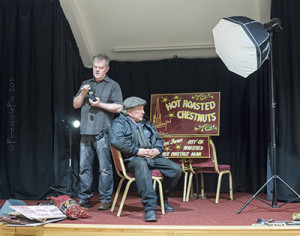 At the start of the evening John gave his usual very clear explanation of what he was trying to achieve with his lighting set-up. In previous Lights Nights there were usually female models and the lighting arrangement was normally designed to bring out the smoothness of the skin. John explained that he usually looked for different things when using male models, particularly in portraits, and imperfections were often highlighted. He also said that these sort of portraits sometimes were really effective in black and white. He was using 2 studio flashes the evening which was a fairly simple but effective arrangement, and he explained all aspects of the set-up, showing how moving the lights gave different effects. 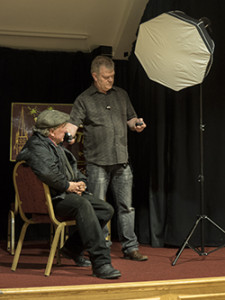 John made various test shots to determine the best camera settings and then invited everyone up to “have a go”. He brings along with him a universal radio flash trigger for firing the flashes and as each person came up to get their shots they would attach the trigger giving them full control over the studio flashes. As usual this worked very well and straight away there was quite a queue, so the numbered cards were brought out again allowing everyone to keep their place in the queue but still be able to have a chat with people around the room (always a feature of such an evening).

Throughout the evening Alan Jones was very patient despite his normal career not being a photographic model! He only had a short break, such was the stream of club members wanting to get their turn, but after the break he brought his small scotty dog, Albert, with him who displayed just as much patience and gave everyone a chance to capture an image of “One Man and his Dog”! All in all a very good evening with thousands of images captured on memory cards (and some actually on photographic film!) which probably led to many happy hours at the computer creating just the effect wanted. Some members have sent in some of their early efforts and you can see them in the gallery below and here. If you have any images you took on the evening please email a copy to wccweb@sgw.me.uk and I will add them to the gallery – the more the merrier.